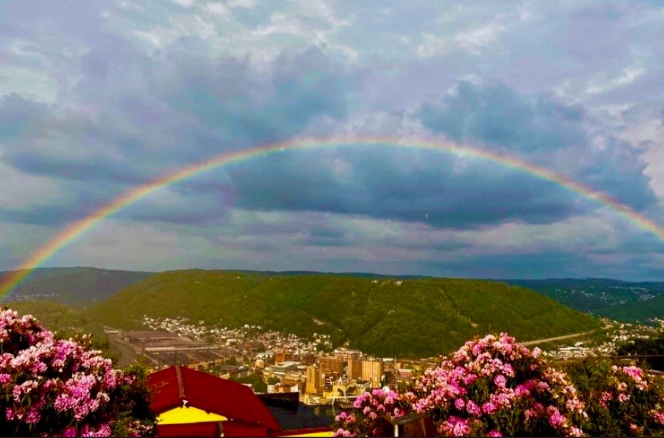 I grew up in the Allegheny Mountains of western Pennsylvania. One Friday evening when I was probably in first or second grade, our family was on our way to a restaurant for dinner. From the back seat of the car I could see a large cross planted on top of a hill. The cross was on fire.

My memories of what followed are vague. I remember pointing it out because I thought it was cool. I knew what the cross was all about and figured that someone wanted to light up the sky with its message on a beautiful Friday night. After all, isn’t Jesus the Light of the world?

I also know that whatever my parents said in response, there wasn’t a big conversation or explanation of what was really happening, namely that in our city was a white supremacist hate group made up of so-called Protestant Christians whose targets were African Americans as well as Jews, other immigrants with which our town was filled, and Roman Catholics. I would learn all of that later, along with the fact that cross burning was a sign of intimidation dating back to medieval Scotland when clans would set hillside crosses ablaze to rally the troops in defiance of their military rivals because they had Christ on their side. But this was a different kind of clan with a different type of intimidation, and Christ and His cross had nothing to do with it. My guess is that my parents figured that their first or second grader wasn’t ready for the awful story. Instead we made our way to the restaurant and enjoyed our dinner.

Many years later, I learned that my white eastern European immigrant grandparents also lived in fear of the people who burned crosses and I remember feeling terrible about that since they had bet their lives on their new beginning in America. I also remember my grandmother telling me in her thick accent that we are to love everyone no matter where they came from or what the color of their skin was because “the Good Lord” made us all and that is a beautiful thing. To this day her voice exists in my memory.

Anyway, fast forward to about a month ago when this picture was taken following a storm and popped up on my Facebook page. When I saw the rainbow covering the same hill on which I once saw the burning cross, I suddenly thought of that moment on the way to dinner literally for the first time in decades, shocked but certain that the memory was recovered by recent images of gross injustice along with others dating back hundreds of years. I now know that the wonderful place I called home included an ugly story of something that was right there in our town and even now I feel some shame in telling it. And yet I share it because I think that many of us are being faced with stories from our history that are hard to admit and hard to tell, because they are painful, ugly, filled with shame, and they rob us of our idealized narratives.

But the rainbow with all its color is a sign of God’s covenant. It’s a reminder of God’s presence, glory, and power to make us new creations, so that the answer is not to pretend, but to take what’s real and head for the cross, where the Light of the world gives us the light of life in which to walk together. Martin Luther said that we are “at the same time saints and sinners.” Getting wrapped around that fact, knowing what the cross is really all about, and joining hands to walk in the light of His promise is the hope of the world no matter what’s in our past or what the story is today.

May God bring on the rainbows! And may we walk together as new creations in the Light of Christ!