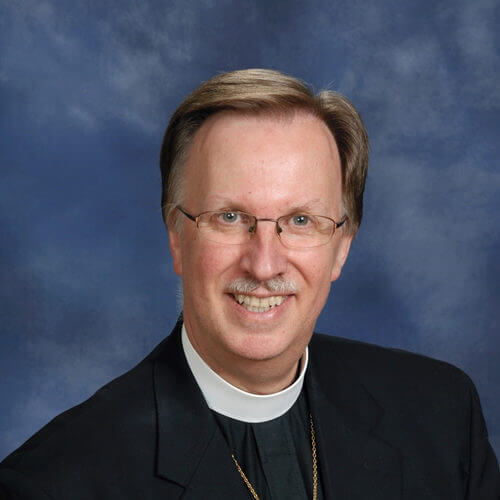 In this first week of Pentecost, allow me to address you from a pastoral heart that, like yours, must surely be troubled.

Images of the brutal murder of George Floyd and the wider context of racism which surrounds it ought to sicken and outrage people of every race, religion, and political persuasion, including those who bear the name of Jesus Christ, who loves the entire world. During my online homily on the Day of Pentecost, I spoke of a life renewing moment from the Gospel of John when Jesus breathed on his disciples and said “receive the Holy Spirit.” Had the message not been prepared and recorded earlier in the week, I would have also pointed out that in the very days when we remember the One who breathes life into us, we mourn one of His children whose earthly life ended with the words “I can’t breathe!” Meanwhile, images of righteous and peaceful protest expressed our freedom of speech and desperate need for justice and fundamental change after so many unheard cries. And images of violence and destruction have clouded that righteous and unfulfilled cause, as harmful and divisive words fill the air.

Without a doubt we are living in days of conflict, injustice, fear, and loss. The lives of young children who were created in the image of God will be shaped by them. Like crimes within the church have tarnished its witness and caused people to look at members of the clergy with suspicion instead of trust, the actions of some have hindered the work of countless other honorable servants whose vocation is in law enforcement. And all of it is taking place in the midst of a worldwide pandemic which robs other children of God of freedom and life, and has also sown division among us. These are hard words. But they are certainly true, and they remind us of the magnitude of our sins against God and our neighbor along with our need for God’s all-sufficient grace.

Many are asking what we as a faith community should do. My first call last weekend via social media was to pray. But even that is now met with disdain by those for whom “thoughts and prayers” has become an empty euphemism for doing nothing. However, as a wise pastor once said to me, “as soon as you pray, start thinking about how you can be God’s answer to your prayer and then start acting that way.” So, in the name of our Risen Lord, I ask you to persist in your prayers and then find ways to be His answer. Reject the notion that genuine thoughts and prayers equals doing nothing, and instead see them as doing something essential to everything else we do in life.

Last week, Concordia College-New York President John Nunes, himself a person of color, declared in an interview that while work toward systemic change is obviously needed in our society and culture, his first call is not to revolt, but to build bridges and relationships with children of God who are not of your race, “one by one and day by day,” one conversation at a time, one cup of coffee at a time, one dinner table at a time. At the end of the day, he says, it’s about people who have been changed by Jesus becoming “change agents in the world, one by one, from the inside out.” Perhaps you don’t know that the Lutheran church in the United States is among America’s whitest denominations. By contrast, The Lutheran Church of St. Andrew in Silver Spring, Maryland is known in places near and far as a diverse community of faith to which people have come from dozens of nations, where we find sisterhood and brotherhood in Christ, and where we stand humbly together as God’s works of art at His table of grace. While we are far from perfect and there is much left “to do,” do not shortchange the fact that you are already doing something about racism and division in our nation, for which I give thanks to the Lord of every nation, in whose name my brother Pastor Nicholas Gonzalez and I urge you to keep doing what you’re doing as we seek to act even more decisively in the days ahead.

So please do think and pray. Issue God’s call to repentance whenever necessary, and let us all search our own hearts for even small corners where the Spirit’s cleansing might be needed. And then do what you can at every opportunity to be an agent of healing, peace, justice, and reconciliation for the honor and glory of God.

In the coming days, our leaders and staff will be talking about other opportunities to listen, speak, share, and act in ways that overcome racism, anger, injustice and fear with the perfect love that casts out fear. After all, this is not a political issue. It is not an issue about which Christians can honestly debate and disagree on the basis of scripture. It is a spiritual issue that goes straight to the heart of our faith. And it is a moment of great opportunity for the Gospel and for the ministry of a church family we love and in which all are welcomed, online for now and someday again in person.

Throughout history, the people of God, by grace, have endured conflicts, plagues, seasons of exile, and other results of a fallen world. As the children of Israel made the difficult climb back to Jerusalem to worship God at the temple, they chanted Psalm 121. “I lift up my eyes to the hills. From where does my help come? My help comes from the Lord, the Maker of heaven and earth.” Yes it does! And it will in days ahead, so that we who trust in Him may sing that song and walk by faith to a new day of celebration as people of hope, united in Christ, and in His family at St. Andrew.

With love, your servant in the ministry of Jesus,
Pastor Hricko