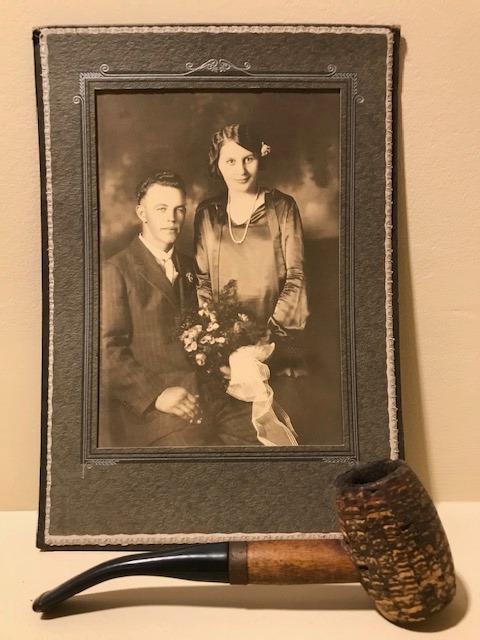 I’m borrowing this thought from a sermon by Pastor Mark a few years back, when in proclaiming the Gospel, he said in this day we stand on the shoulders of the saints who have gone before us.

I am blessed. Those saints that went before me showed me how to persevere through their example and their love of the Lord. I don’t recall hearing my Grandparents or my Dad complain; it wasn’t in them to do so. My Grandparents were born in 1902 and 1903 on the Great Plains to farming families, and lived to see the War to end all Wars, the Great Depression, the Dust Bowl years, yet another World War, and plenty of death and hardship in their families.

When I was a boy, I would ask my Grandfather to tell me stories of his youth. He would grin, pull his pipe from his overalls, pack it with some Prince Albert tobacco, strike that wooden “farmer’s match” on his hand (those were some tough farmer’s hands that had seen a lot: the death of his father to tetanus when my Grandfather was young, the birthing of many a calf, foal and piglet, and he was somewhere in the house when the 3 children were born), and with that first puff of his pipe, with the smoke billowing about his head, he would begin to tell of his younger days.

He told me how he watched his Dad, after having contracted tetanus become no longer able to swallow even soup, and how upon his Dad’s passing, my Grandpa, the oldest of the boys, took over the farm with his Mother. He told of walking 9 miles to town (Artesian, SD) with a load of grain pulled in a wagon by Mollie the plow horse in sub-zero temperatures when he was nine or ten years old. He told of the Dust Bowl years when it wouldn’t rain, which my Grandparents called the “Dirty Thirties”. He would chuckle as he said it was like living in biblical times when it wouldn’t rain, and the otherwise fertile prairie ground turned practically to stone. They had to sell the cattle, as there was no hay. Then one spring, it rained. And rained. The ground softened, the farmers were once again able to plow and plant, and the tender young crop began to sprout. One morning, off in the distance there was a large dark cloud. Locusts. In minutes, those tender young shoots were chewed off and fell to the ground.

We live in days of uncertainty, though we’re learning that all days are uncertain, save for one certainty only, and that is God loves us. In these days of cancelled school, soccer practices, swim meets, drama club, marital arts, lacrosse, basketball, track, choral and band concerts, I’ve noticed something. In a walk the other day, I saw sights I’ve not seen much in a while: kids riding bikes and entire families out for a walk with the dog. Perhaps we’re discovering what matters, and perhaps we are putting aside, though not by choice, so many things that were all-consuming, that really don’t make such a difference in the end.

Perhaps we’re learning that the treasures we store up here on earth that rust, are consumed and taken from us don’t last. It’s the reassurance of heavenly things where we now seek to put our care and our hearts.

Thomas Paine speaks of the times that try our souls, that Heaven places a proper price on what matters and that dearness only gives everything value; reminds me of Jesus’ teaching.

In 1793, one in 10 Philadelphians died of Yellow Fever. Dr. Benjamin Rush, Surgeon General of the Continental Army, and a signer of the Declaration of Independence, refused to leave, and instead stayed on to treat the afflicted. He was devoted to his patients; they mattered the most.

We are using our time these days doing what matters: caring for others, spending time with our families, exercising the fruits of the spirit: love, joy, peace, patience, kindness, generosity, faithfulness, gentleness and self-control. No one is perfect at these things, though we certainly have time to practice!

We are blessed. God loves us, and in these days, The Good Shepherd watches over us, giving us all we really need and in so doing, teaches us what matters.