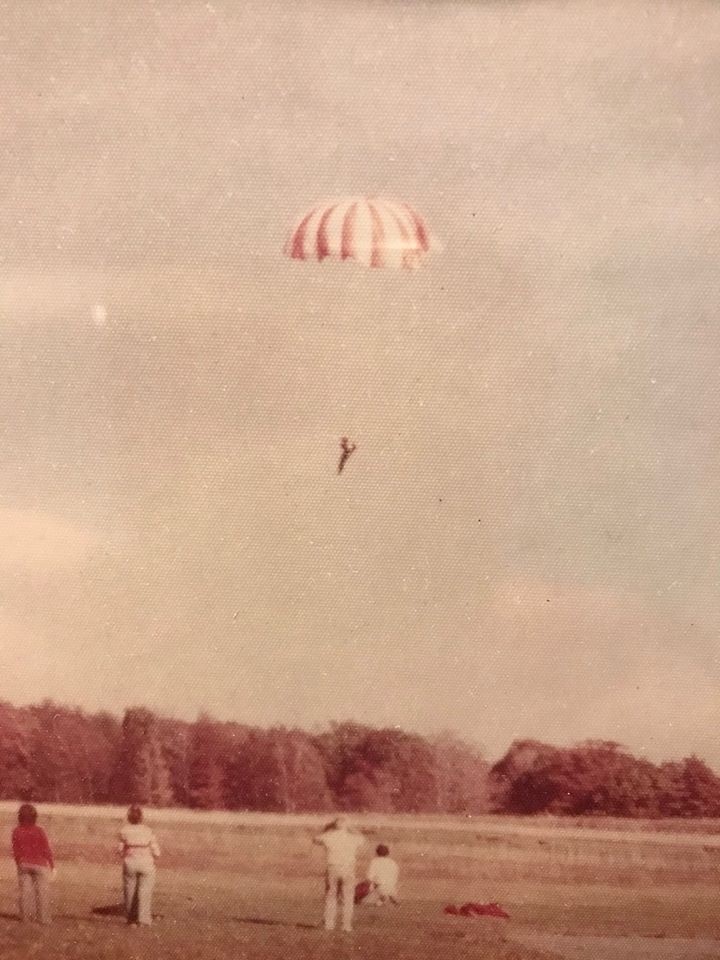 “Why would you want to jump out of a perfectly good airplane?” That’s usually the first question people ask when they see this photo of me having done just that when I was an undergrad at the University of Pittsburgh. The answer isn’t very glamorous. I did it on a dare from a friend, having told him that I could do it if I wanted to. In fact, he’s the one who took the picture.

“Weren’t you afraid?” they ask. That answer isn’t glamorous either. “Terrified!” is my typical response, especially given the fact that back in those days, you brought a helmet from home, packed your own parachute, and jumped all by yourself. None of this tandem stuff. That said, I must admit that once the chute opened and I was pretty sure I wasn’t going to die, my fear turned to exhilaration. It was in the fall and the leaves around Indian Lake, Pennsylvania were changing colors. The quietness was nothing like I’d ever experienced and for a while it felt more like floating than falling, high above the earth below. It was just me, the blue sky, and of course, the parachute. But then, the quiet exhilaration evaporated and I was terrified once again as I got closer to the ground and tried to land in a field rather than in one of those trees.

And that’s the story of just one of the times when I learned that courage is not the absence of fear, but the ability to take a step in spite of your fear. Maybe you understand, either because you also took a flying leap yourself or did something far scarier, and not just for the sake of an adrenaline rush. After all, those who parachuted into Normandy on D-Day weren’t jumping for the fun of it. Or maybe it was the chance you took on a job, a relationship, or a move, not knowing how it would turn out. And maybe in some ways, it’s not all that different from the steps we take every day into places of fear, exhilaration, and uncertainty about the future, riding their waves because our family members and friends need us to step into their heartaches as well as their joys. Sometimes they even dare us to do it because we are people of faith.

My memory of “touching the sky” between that terrifying first step and my landing in that field remains one of my happy places to this day. But what I’ve repeatedly learned since then is that it really wasn’t just me, the sky, and the parachute. It actually was a tandem jump because I wasn’t alone at all. Never have been. And that always makes a world of difference even when the journey ahead seems a little terrifying.

I don’t know what steps of faith might be in front of you these days. But whatever they are, just know that faith isn’t the absence of fear. It’s the grace to go forward in the midst of it, knowing that you’re a child of God. He’s your “Valentine!” And it’s always a tandem jump because Jesus has our back every step of the way until it’s nothing but pure exhilaration.